Showing posts from March, 2019
Show all

We hope Osceola residents will vote to improve Lynx

Great news! Osceola County is taking steps to create a dedicated source for funding that can help both the Lynx bus and SunRail. The rest of Central Florida should follow Osceola’s lead.
On May 21st Osceola County voters will have the opportunity to approve a one-cent sales tax for transportation. If voters support the referendum, money raised by that tax can be used for a variety of transportation improvements from road widening to helping Lynx and SunRail.


That’s outstanding. Please vote "for" this referendum.
Lynx is catastrophically underfunded. Right now, the Florida Department of Transportation is helping to fund SunRail. In 2 years that becomes the responsibility of local governments.
Public transit – Lynx and SunRail – don’t raise enough from the fare box to fully pay operating costs. If government didn’t subsidize public transit, people would have to pay up to $14 for a one-way ride on some Lynx routes.
No public transit system in the world can pay for operations solely…
Post a Comment
Location: Kissimmee, FL, USA
Read more

Lynx riders were the big losers when the bus CEO resigned 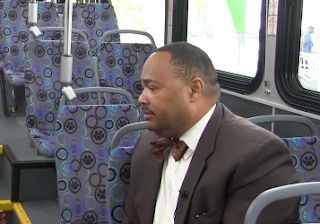 Lynx bus CEO Edward Johnson is gone, but not forgotten.
Though Johnson had some shortcomings, we believe that he tried his best to improve public transit for thousands of Central Floridians.

Ultimately, Johnson’s departure will hurt riders the most. It could take six months or more before a permanent replacement is selected, and then that person faces a learning curve to understand the system and all the political players.
Much has been said about the $21 million deficit at Lynx, we think it’s important to note the technology innovations the bus system added under Johnson’s leadership to improve the rider experience.
Those include: ·Mobile-fare collection (paying with your smartphone) ·Real-time bus tracking app ·Free wi-fi on all the buses
As for the $21 million deficit – that’s what happens when you try to provide transit service to a sprawling metro area when your agency is catastrophically underfunded and doesn’t have enough people, equipment or other critical resources.
In an interview la…
Post a Comment
Read more
More posts