Showing posts from June, 2018
Show all

After 25 years Lynx still don't get no respect 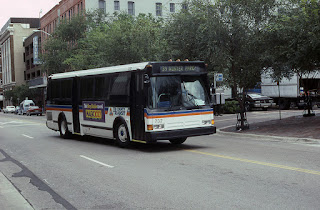 Tri-County Transit was re-branded as Lynx 25 years ago. They painted many of the buses funky tropical colors to add some pizzazz.
That was probably the first time elected officials in Orlando took public transit seriously.
Yet Lynx continues to drag along because frankly, we don’t know of any elected officials who ride the bus, except maybe for a news media photo opportunity.
Lynx may as well be a homeless guy panhandling at the side of the road – all the suits see him but ignore him.
But Lynx is not a homeless guy. It’s an integral part of Central Florida service economy. If hourly workers can’t get to work, the theme parks, convention center, hotels and so forth are out of business.
Granted SunRail is the new shiny toy in Central Florida’s public transit arena. Lynx may not seem as sexy and cool as SunRail, but every day Lynx gives 80,000 more rides than SunRail. (That’s not a typo).
Many Lynx routes run on weekends and late at night. SunRail does not. Despite this, Lynx riders are subject…
Post a Comment
Read more
More posts