Showing posts from December, 2018
Show all

Even Mayor Dyer doesn't seem to care about Lynx riders 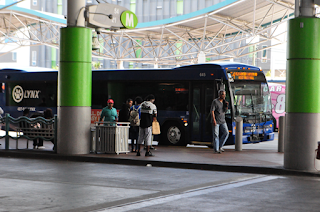 Not once during the Orlando State of Downtown address last week (Dec. 6) did Mayor Buddy Dyer mention the importance of improving and expanding Lynx bus service.
In a section of the speech Dyer labeled “connectivity” (which you can see by clicking here) he praised the SunRail commuter train. Dyer spoke of pedestrian trails, bike-share, optimizing vehicle flow, and even the introduction of a ride-share hub for downtown’s late-night club hoppers.

But Dyer – a member of Lynx board – did not specifically call out Lynx and the vital role it plays in moving people, especially those who live east and west of downtown Orlando.
Mind you Lynx Central Station sits in the heart of downtown – a stone’s throw from Creative Village – the mayor’s urban renewal pet project in the historically black Parramore community.
By overlooking Lynx -- either unintentionally or purposefully -- Dyer showed why Lynx continues to limp along. Too many politicians don’t give Lynx the priority and attention it deserves.
Po…
Post a Comment
Read more
More posts